This is not going to be a fuzzy warm story about nice animals.  Rather we are going to consider a man who befriended one of the most ferocious animals in Mother Nature: the grizzly bear.  I have recently been commenting on the values of exposure to nature and wilderness that is important for a healthy humanity and a deeper spiritual life.  It is interesting how all hermits and monks everywhere had that tendency to “get away” from civilization on the pretext of getting away from distractions, but I always thought there was a lot more there than they could articulate.  In any case, we are not returning to this topic but to something not unrelated but very different.  There is a deep lesson here for our own spiritual and theological understanding of our place in the great scheme of things.  So let us begin.

Recently I read an obituary of a Canadian naturalist by the name of Charlie Russell.  He spent a good part of his adult life studying and living close to bears, and he developed a very unorthodox view of them.  This from the obit in the NY Times:

“Mr. Russell was outspoken in his belief that the view most people —
including many of his fellow naturalists — held of the bear was wrong.

‘I believe that it’s an intelligent, social animal that is completely
misunderstood,’ he said in a PBS Nature documentary about his work.

To prove the point, he and his partner at the time, Maureen Enns, a
photographer and artist, spent months each year for a decade living
among bears in a remote part of eastern Russia.
They wrote several books based on those experiences and were the
subject of documentaries and countless articles. Mr. Russell’s ideas,
though, were not embraced by everyone.
Some fellow naturalists worried that they might lead people to be
unwisely casual around wild animals. And in Russia, Mr. Russell ran
afoul of criminal elements and corrupt politicians tied to bear
poaching.”

But getting back to the beginning, Charlie was not an academic naturalist; he did not get a degree in the subject; he did not just read about bears in books or learn about them in lecture halls.  Charlie went out and physically encountered them.  He had grown up in an outdoor setting; his father ran a wilderness outfitting and guiding business.  At some point Charlie’s father decided he wanted to get some film of bears in British Columbia.  His father “was also a noted naturalist and writer, and when he decided to make a documentary about the white subspecies of black bears on Princess Royal Island in British Columbia, he took Charlie and his brother Richard along as assistants. The experience, Charlie said later, helped him begin to think differently about bears.

The three found that they were mostly capturing footage of bears’
backsides as the animals ran from them — until they left their rifles
behind when they went out to film.
‘The three of us eventually came to the conclusion that bears could
sense that we were not a threat,’ Mr. Russell told The Edmonton
Journal in 2002, ‘that somehow they realized that without a gun, we
would do them no harm.’”

As his interest in bears grew, he realized that he needed to study bears that had little or no human contact–that in fact did not know of human threat to them.  From the obit:

But to really get at the innate nature of bears, he needed to find
ones that had no history of negative encounters with people. That is
what sent him and Ms. Enns to Kamchatka, which had been off limits to civilians for military reasons during the Cold War and thus was full
of bears that had had no contact with humans.
They first scouted the area in 1994. In 1996, Russian officials
granted them permission to build a cabin near a remote lake. Every
year they would fly in, using a small plane Mr. Russell had built from
a kit, and stay for four or five months.
The bears grew to know them, Mr. Russell said, and became comfortable enough with them that sometimes a few would come to the cabin and linger to see if he and Ms. Enns wanted to go for a walk with them.”

Here’s a couple of photos from that idyllic time: 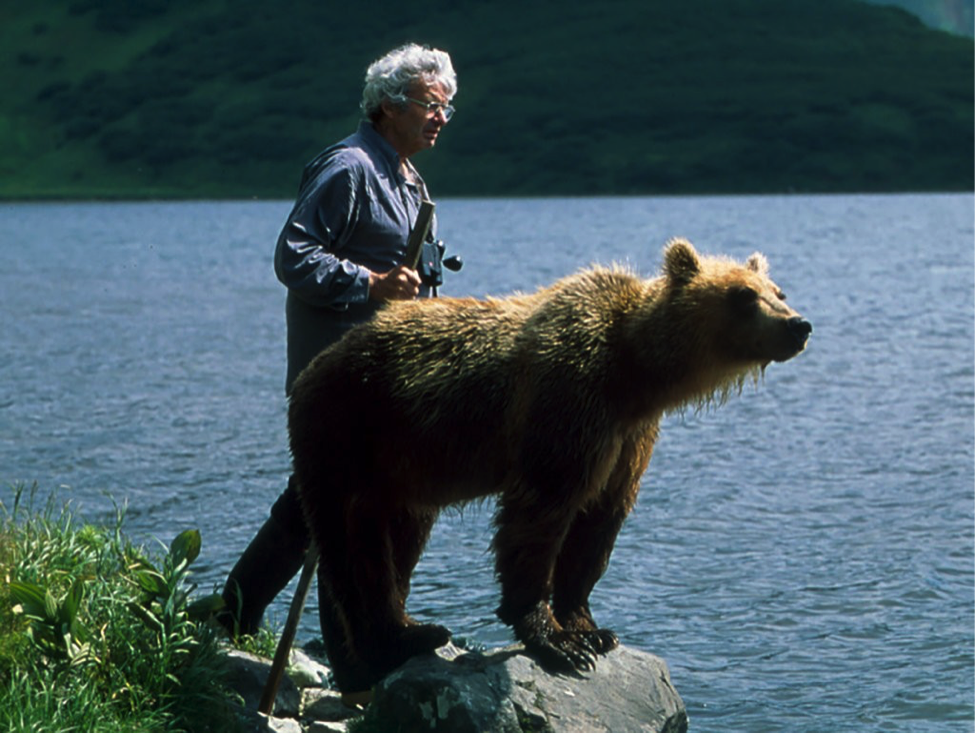 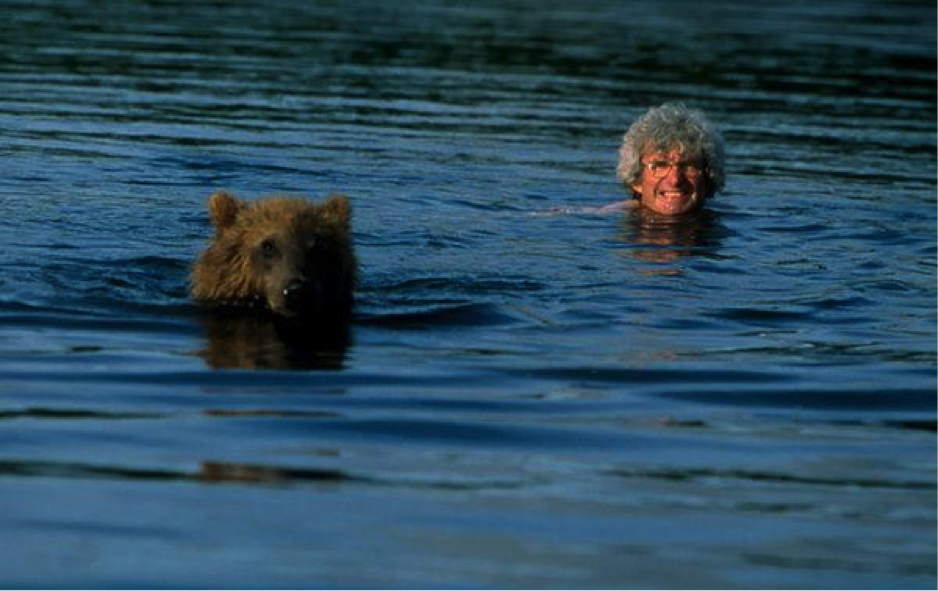 Above with a young grizzly bear!

But this would not last …simply because there are so many human beings who do not want this kind of relationship to “wildness.”  From the obit:

“His conclusion that bears were not naturally hostile to people earned him enemies among hunters.

‘A lot of it is because the hunting culture needs to promote an animal
as fearful so that people can feel brave about killing it,” he told
the Australian newspaper The Age in 2009.
His live-with-the-bears approach also drew criticism from some
wildlife officials. ‘He’s teaching people how to get mauled,’ one
said.”

Charlie would be the first one to tell you that you have to exercise great caution with these animals, that you have to respect their fear of you, that they are not your pets and you have to be able to read what their feelings toward you are.  Do not be moronic and try to take a “selfie” with a grizzly!

But his research and relationship with the bears had a sad ending.  From the obit:

“His and Ms. Enns’s experiment on the Kamchatka Peninsula ended
heartbreakingly. When they returned there for the 2003 season, they
found that almost all the bears they had become acquainted with were
gone, presumably slaughtered. A bear gallbladder — the prize for
poachers, valued in some countries as an aphrodisiac and general
health remedy — had been nailed to their cabin wall, like some kind of
warning.
‘The bears were killed so we would go home,’ Mr. Russell told The
Globe and Mail in July 2003. ‘It is a brutal ending to our research’…. Their relationship ended in the aftermath of the slaughter of the
Kamchatka bears in 2003, an incident that also left Mr. Russell with
the fear that, by teaching the bears to trust humans, he had
inadvertently conditioned them not to run from the hunters.
‘I can see how easily they were killed,’ he said. ‘That’s my nightmare image.’”

There’s a lot of food for thought in this account, ranging from the social to the theological.  What is it about us/in us that makes us enjoy killing animals?  Ok, most animals kill other animals for food, but once they have eaten they move on.  It is a kind of cycle of nature.  They don’t do it for a trophy or the thrill of killing a “dangerous” animal.  Then there’s certain animals that will kill when they feel threatened.  We do both of these things: food and self-protection, but then we add this bizarre thing of “sport killing.”  What is that all about? Maybe we are touching the roots of violence in general in all this. In Christian theological language we might say that’s an effect of the “Original Sin.”  Ok, but giving it a name may simply obfuscate the reality of what is there; if we have a word for it we think we understand the phenomenon.  Is it any wonder that we as the whole human family seem so “out of whack” with Mother Nature, so out of harmony with the natural world.  It seems to serve only as another commodity for our exploitation or as a tool to increase our own enjoyment.  The fact is the natural world reflects back the various self-inflicted distortions of our humanity.

Some of you may be aware of the great Russian saint and hermit, St. Seraphim. In some mythic, iconic portrayal of him, I forget where I saw or read about this, he is seen in harmony with a great Russian bear.  I thought of that when I saw those photos of Charlie with his bears.  Whatever be the historic value of that depiction, its real significance is that Seraphim is shown as having “returned to Paradise,” where human beings lived in harmony with the natural world.  This would also be well understood by the Chinese Buddhist/Taoist hermit tradition. In any case, the beginning of the Genesis account depicts the world, the whole natural world as “God’s Temple” in a sense, and the human being as a kind of “priest” in that temple meant to care for it all and bring it all back to its Creator.  If the human being has the “lead part” in the great scheme of things, it is only to be a good caretaker and be responsible for its well-being. When John Muir was in Yosemite he said he felt like he was in God’s cathedral.  Muir would have loved Charlie Russell.